With the hot weather still going strong, I thought I’d take a look at the summer beach read. A really good chick-lit book can be hard to find, so I’ve compared two of this summer’s hottest releases with the aim of hopefully giving an idea of what’s on the market at the moment.

First up, it’s Jane Costello’s The Wishlist. With her thirtieth birthday fast approaching, Emma Reiss is determined to tick off all of the items on a list she complied fifteen years earlier before the big day arrives. Plans inevitably go awry when her attempt to cross ‘one-night-stand’ off the list ends in drunken disaster – made still worse when the object of her affection moves in next door! Over the next six months, Emma attempts to force herself out of her self-imposed comfort zone – with hilarious and unforeseen consequences.

From the start, it’s fairly obvious where The Wishlist is going. However, Jane Costello has a really fresh and funny way of writing that really makes this stand out from the pack. It made me smile all the way though – and even laugh out loud on several occasions – and despite the predictability I found myself really rooting for the characters. For the most part, all of the characters are genuine and believable – which for me is a vital component of any beach read.

My second pick is Milly Johnson’s It’s Raining Men. Three hectic career women set off on a much-needed spa break, only for a mix-up in the holiday booking service to see them end up at an entirely different destination. Very soon, they realise that their home for the week has its secrets – like why there are no women around, why the villagers are so unfriendly, or why there are so many mysterious clouds overhead? Determined to get to the bottom of the mystery of Ren Dullem, the three friends set out to win over the residents – which just happen to include a dashing set of three handsome, single brothers. 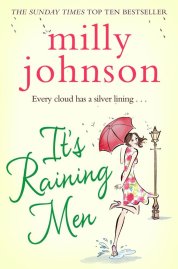 Unlike The Wishlist, I thought Milly Johnson’s latest offering left a lot to be desired. The characters all felt a bit one-dimensional and their decisions just seemed unrealistic. It felt to me like the author had a happy, fairytale-esque ending in mind from the offset, and the rest of the book was contrived to make sure she could get there. Much of what happens in-between seemed entirely superfluous and quite tired, while the characters offer nothing new to the genre and are actually slightly annoying. I also thought that the writing itself was extremely stilted on occasion. For me, it was readable, but that’s about it.

I think that these two books really sum up the differences that can come out of some of a literary genre. Both of the above were relatively good summer beach reads that make for perfect stress free sunbathing, but moving forward I’d pick Jane Costello every time.

If anyone else has read any great ‘chick-lit’ books this summer, do let me know – I’d love to hear about them!