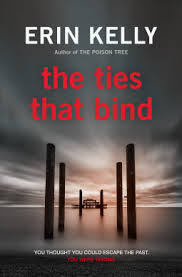 Fleeing a bad relationship, struggling true crime journalist Luke runs to Brighton. Soon, he unwittingly stumbles across a story that has the potential to completely turn his career around. Joss Grand, now an upstanding business man and property owner, was once an infamous racketeer who ruled Brighton with an iron fist.

As he delves further into Grand’s murky past, and into the unsolved murder of his right hand man in the 1960’s, Luke soon finds himself increasingly over his head. His attempts to find the perfect story have stirred up old secrets that some people would prefer to leave buried. Someone is watching his every move, and it’s impossible to know who to trust. But by the time that Luke finds out just how high the stakes are, it’s too late.

There’s no doubt that Erin Kelly has a talent for writing skilful, well-structured mysteries, and this is no exception. It starts off quite slowly but then all of a sudden it picks up the pace and throws in a few curveballs to keep you guessing. The suspense gradually builds as the novel progresses and the twist at the end

My main problem with this book was that Luke wasn’t the most likeable main character. It was incredibly frustrating to watch his relationship with Jem develop. He then spends most of the book distrusting and ignoring his friends, whinging in self-pity when anything goes wrong and being wilfully stupid whenever the opportunity arises. It made it quite hard for me to summon up the ability to care when his life is hanging in the balance later on in the book.

I really enjoyed Erin Kelly’s ‘The Poison Tree’, which was adapted into a TV drama series last year. Her latest novel would work equally well on the small screen – there’s plenty of action – but it felt like too many of the characters here were written for this purpose. Quirks and character flaws are magnified and simplified until people almost felt like caricatures and there are too many happy co-incidences and instantly formed friendships for me to really believe in this as a book.

A blog full of books, photography and fangirling ♡