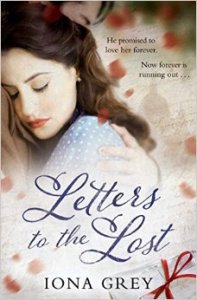 In wartime Britain, American airman Dan Rosinski falls in love with the newly – but unhappily – married Stella Thorne. Against their better judgement, they embark on a passionate affair. But the odds are stacked against them. Dan risks his life every day and Stella is trapped under the weight of social conventions, and their relationship is soon tested to its limits.

Many years later, a young girl is hiding out in an abandoned house on the run from an abusive partner – ill, broke and with no plans for the future. But when Jess opens a letter addressed to an ‘S. Thorne’, she’s immediately drawn into a love story that spans over half a century.

Now ninety years old and living in the USA, Dan is determined to find the girl that he fell in love with all those years ago. As Jess reads through a box of old letters she finds in the house, she becomes determined to help him to find an ending to his story.

Will stumbles across Jess quite by chance while working as an heir hunter. He has his own troubles – with a history of mental illness and a feeling that he fails to live up to his family’s high expectations. Working together to solve a decades old mystery, Will and Jess each find ways to overcome their problems and to hope for a new future.

The basic plot of this novel wasn’t anything hugely innovative, but if you’re a fan of this genre, you’ll love it. The skill with which author Iona Grey writes really brought the story to life, evoking 1940’s Britain beautifully and really driving home the feeling of ‘make do and mend’ that dominated people’s lives. She also gets into some really important social issues – such as poverty, domestic violence, the treatment of people with disabilities and sexuality. These issues resonate through generations and highlight startling similarities between Stella’s problems and those faced by Jess sixty years later.

Where this book came alive for me was in the characters themselves. Each of the four main characters had their own unique voice that helped them to leap off the page – especially Dan. A lot of our impression of him is formed through emails and letters, which worked really well as a plot device, and while he could have come across as a bit one dimensional, he’s actually really charismatic and easy to relate to and empathise with.

I raced through the book, and wouldn’t hesitate to pick up Iona Grey’s next novel. Thanks to Iona and the Curtis Brown Book Group for the review copy and the great discussion.