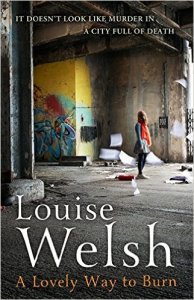 Any regular readers of my blog will know that I have a thing for dystopian fiction. I also love a good crime novel. Louise Welsh’s new novel, ‘A Lovely Way to Burn’, is a mash up of these two genres and so was always going to be hit in my book.

Stevie Flint is horrified when she discovers the dead body of her boyfriend, Simon. But having reported it to the police, she’s immediately struck down by a debilitating flu-like illness. When she recovers, she emerges to find that people across the country are being struck down by a mysterious, and in most cases fatal, sickness known as the ‘sweats’. It soon becomes clear that people are dying in droves – and there’s nothing that the doctors can do.

Despite everything that’s going on, Stevie is determined to find out what happened to Simon – and when she finds a package addressed to her hidden in Simon’s flat, she is convinced there’s more to the story.

When it becomes clear that Simon has been murdered, the devastation unfolding around her means that there’s no one left who cares or who has the ability to help. With death and crime at every turn, the police are understaffed and overstretched – struggling to carry out the most basic service and to cope with a national emergency. There’s quite simply nothing they can do.

Stevie soon realises she doesn’t really know very much about Simon, or his work as a doctor. As she begins to delve deeper into his life, it’s clear that someone will go to great lengths to stop her from finding out too much. Despite this, Stevie clings on to her desire to get to the truth. It becomes a crutch and a way for her to navigate the changing world around her, even if it does even up leading her into even greater danger.

This book is very different to the majority of the apocalypse-style novels out there. The majority of the plot Stevie’s attempt to solve a murder in a world where everyone is scared, sick or dying. That means that as well as the threat from the people trying to stop her investigations, there’s the added threat that comes from a world when law and order is breaking down completely. The setting of London is also both familiar and threatening at the same time. Combined, this all adds up to a brilliantly atmospheric and tension-filled mood.

But while the fact that people are dying and society is falling apart helps to ramp up the danger factor – the main focus of the story is Stevie’s investigation into Simon’s past. As a result, it sometimes felt like there was a bit of a disconnect between the two main themes as they vied for attention.

It’s a good start to the series though and I’m looking forward to reading the next installment.

A love of books are our very core!