I’ve been struggling to put this book into words. I suppose it could be described as a sort of warped version of The Hunger Games. Except in this case we have a world dominated by vampires embarking on a once-in-a-decade human hunt, with the lucky hunters drawn from the population by lottery. 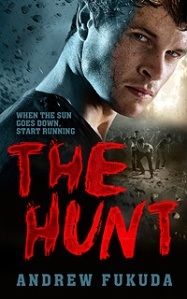 However, one such hunter is actually a human, or a heper as they call them, living in disguise amongst the vampires. Knowing that he will be exposed as soon as the hunt starts by his inability to keep up with the pack and his unwillingness to tear their prey apart with his fake vampire fangs, he is rapidly running out of time to come up with a way out. With the help of some unexpected allies, his world is changed forever as he uncovers hidden secrets that go against everything that he’s been taught.

I have to start by saying that The Hunt is written really well – it had a great pace, plenty of action and it was quite addictively readable. However, while the concept was interesting, there were some gaping holes in the plotline that managed to completely distract me from the main story on several occasions throughout the book.

There are numerous points that I just cannot get my head around. Whether that’s because the author has failed to think things through or because he simply hasn’t bothered to explain them, I’m not sure.

My first gripe is how our main protagonist has managed to attend vampire school for years without detection. I don’t know how he’s managed to get hold of fake fangs or contraband razors in the first place, but those basic difficulties aside, I don’t see how it is possible to have never coughed, sneezed, sweated, blushed or spilled a single drop of blood in the presence of vampires (who never show a shred of emotion and scratch their wrists instead of laughing).

Secondly, vampires are under the impression that humans are totally extinct outside of government activity. But since there are several secret humans revealed throughout the book, from a relatively low pool of characters, you have to assume that there are lots of fake vampires running around unnoticed. Despite this, there’s no testing of any kind?!

And then there are the things that are just plain weird. The vampires in this book don’t kiss, they rub armpits. And nowhere does it explain how they are able to reproduce, if they do so in the same way as humans, and if not, how fake vampire humans/manage to have babies without shedding any blood at all (as this can apparently be smelt from miles away).

There are plenty more, but I don’t want to reveal any spoilers. If anyone can offer up an explanation for any of the above, I’d love to hear it!