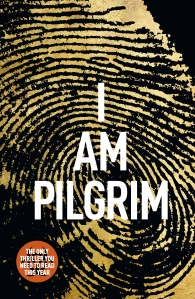 ‘I Am Pilgrim’, the debut novel from Terry Hayes, takes us inside the most secret of secret intelligence agencies, following an attempt to locate the source of an imminent terrorist attack.

Having left the secret service, all the narrator wants to do is to be left alone to live out his life free from retaliation or revenge. But having been drawn back into the world by a particularly persistent pursuer, he finds himself at a seemingly typical crime scene in a New York motel. He soon realises that he’s up against a killer that has memorised all the tricks in the book (literally!) to evade the authorities. His presence at the crime scene sets into motion a series of events that reaches into the highest echelons of US security services. Soon he is tasked with a mission that carries deadly consequences – to derail a new kind of terrorist threat that has the potential to destroy the United States from inside its own borders.

‘I Am Pilgrim’ is an expert fusion between cutting edge investigative crime fiction and explosive action. It was clever, well thought out and well-paced, with a real focus on the character and getting inside their heads to understand their motivations.

Over the course of the novel, we’re thrown into the middle of different cases and investigations. These take place at different points in time and take us to locations across to globe, but it soon becomes clear that every case is interconnected in some shape or form. Each case takes centre stage at different points throughout the book and each comes with its own twists and turns, keeping me gripped the whole way through.

The book does jump around a lot between different time periods, and at some points it took me a while to work out where we were and when we were supposed to actually be in the present. That said, these strands do gradually all come together and become clear, with the end tying up all of the loose ends nicely, so for me, this narrative style really worked.

There are a few scenes featuring extreme torture, violence or cruelty – and I did find a couple of passages quite difficult to read! At the same time, some parts were incredibly emotional. The events of 9/11 are woven into the fabric of this book, giving us an insight into the motivations behind certain characters and helping to put their actions into context. These passages were incredibly moving, taking us from the horror of the first moments when the world watched a tragedy unfold to the individual stories of people willing to put everything on the line for strangers they had never met.

I read ‘I Am Pilgrim’ on my Kindle, but almost as soon as I started reading I found myself wishing that I had it in hard copy so I could pass it on to friends – always the sign of a great book!