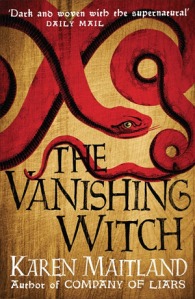 Set in Lincoln in the 1380’s, Karen Maitland’s ‘The Vanishing Witch’ follows Robert Bassingham, a wealthy cloth merchant, and his family as he is pursued by the beguiling widow Catlin.

Blinded by her charms, Robert soon allows Catlin, along with her daughter Leonie and her son Edward, to worm her way into his life. Catlin has no qualms about pushing his existing family aside along the way, allowing nothing and nobody to get in her way. But the two families are haunted by a sinister figure that lurks in the shadows at their every turn. And after one too many unnatural deaths, suspicions and fears are rife and tensions threaten to come to an ugly head.

The book is set against the backdrop of the Peasants Revolt. Through Gunter, a punter on the River Witham, and his family, we get a glimpse into the hardships of life as a peasant, the hardships visited on the poor when they couldn’t pay their ever increasing taxes. Intimidation from royal enforcers was extensive and the demands unattainable. This story of revolution is woven throughout the book to create an atmosphere of general unrest and used as an interesting device to drive the main plot forward. It offers a fantastic insight into a period of history that I personally know very little about.

From the title, I expected this book to be more about witchcraft, but it instead, it turns out that most of the terrible deeds that are carried out (and there are many!) are entirely practical, with duplicity and poison the preferred method of choice. The magical element is used to give a hint of other worldliness and a sense of the fears and suspicions which characterised this period in history.

Characters are gleefully killed off, beaten down or driven mad, people get their comeuppance and everyone’s worst qualities are brought to the reader’s attention at every turn. None of the main characters are very likeable – instead they seem to revel in being as deceitful, selfish and manipulative as possible – which makes you rejoice in their downfall even more. Catlin’s son Edward is particularly unpleasant, although the rest aren’t much better.

Overall, this is a light hearted, well written and well-paced work of historical fiction that combines all of the elements needed to create a fun and enjoyable read. As soon as I finished it, I immediately went and looked for more books by the author – always a good sign!