One of my favourite things about book blogging is getting new book recommendations, so I’ve pulled together some of my top recommendations based on other popular books out there. These are all books that I’d recommend based on my own experiences and similarities in theme, writing style or general feel. This is part one, which mainly looks at the fantasy, urban fantasy and dystopian genres. Other genres, such as crime/thrillers and general literary fiction, are still to come! END_OF_DOCUMENT_TOKEN_TO_BE_REPLACED

In a not so distant future, the world has died. Nothing grows. The supply of tinned or preserved food is almost gone. Most of the people are dead. The ones that have survived are often more dangerous that the hazardous world they live in, and armies of ruthless cannibalistic murders roam the grey and lifeless land. 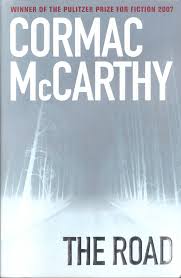 In this world, one man and his son are walking the road. Scratching for every scrap of food and often near death, they make their way towards the coast, hoping to find the survivors. The man knows they won’t survive much longer in the open, and they live in constant fear of people taking their meagre supplies in a place where a dry blanket could makethe difference between life and death.

The man’s whole reason for being lies in keeping his son, the one speck of light left in his world, alive to see another day.

We never find out the names of the man and his son. However, the fact that the book is confined to just their small sliver of the world and their experiences of the long grey road means that we get to know them intimately. It’s intense and sometimes it’s quite claustrophobic, but it’s also incredibly gripping. END_OF_DOCUMENT_TOKEN_TO_BE_REPLACED