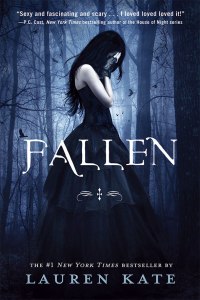 After a horrific accident that destroyed Luce’s life, she lands at a reform school, which is predictably full of oddballs, misery and strict rules.

But the second Luce sees fellow student Daniel, she can’t shake the feeling that she’s met him before. She’s haunted by a sense of déjà vu, and she can’t seem to stay away from him. He, on the other hand, seems to want nothing to do with her.

Soon though, circumstances conspire to throw them together, and it becomes clear that the two of them have a past that goes back far longer than Luce can remember. As Luce searches for answers, the stakes continue to get higher and more dangerous at every turn.

While the idea was good, there were a few inconsistencies in ‘Fallen’ that I couldn’t really get my head around. Daniel and Luce have known each other before, time and time again, that’s clear from the opening pages. But while Luce is ignorant of their past each time they meet, Daniel has the full knowledge of what’s come before. It’s no surprise then when they meet again at reform school. But Daniel is there first. And if he’s lived so many amazing lives in the past, I couldn’t help but wonder what he was doing in somewhere so miserable.

The same goes for all of the other supernatural beings – and there are many! Why immortal creatures would choose to spend their time going to one of the dreariest sounding schools around, when they clearly have other, more interesting options, is beyond me.

The setting itself is very atmospheric – with a school with an onsite graveyard, a gym in a converted church, a huge gothic library, permanent mist and lingering smell – but it felt a little clichéd.

Each if the characters also seemed to fit a bit too neatly into their little boxes – the tortured, cruel to be kind lover, the handsome and charming bad boy, the nerdy but loyal best friend. It would have been good if there had been a bit more character development, as at the moment, they all feel a little flat and one dimensional.

Luce at the end of the novel is just as confused and insecure as she is at the beginning. She doesn’t seem to have moved on or grown as a person in any way, shape or form. Also, I completely understand that Luce being completely in the dark was a large part of the plot, but it was incredibly confusing as a reader – as we’re just as clueless as she is. It managed to be intriguing in parts, but overall quite frustrating!

These issues may well be resolved later in the series, but I’m not sure that the author’s done enough to persuade me to read the second book.