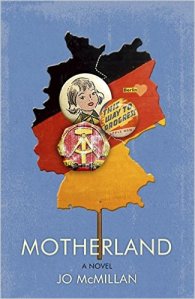 Growing up as the only child of the only communist in the Midlands town of Tamworth, Jess has felt like she’s ‘different’ all her life. When her mother, Eleanor, gets the opportunity to spend time in East Germany over the summers, her and Jess jump at the chance. Living in the German Democratic Republic (GDR), they begin to feel like they’ve found a place where they finally fit in.

While in Tamworth, Eleanor was the butt of every joke, in East Germany she is valued and appreciated. When they meet Peter, a widower, and his daughter Martina through the party, it seems like the final pieces might be starting to fall into place. But it soon clear that the Party comes first, and personal relationships that don’t meet with approval from the top are forced to come second.

Jess is the main character – we see through her eyes and are heavily influenced by her views. Despite this, the character that I emphasised the most with was Eleanor. She clearly has incredibly strong beliefs and a tireless commitment to a cause that she believes in completely – even when she’s spit on, ground down and disappointed. Her steadfast commitment to her values doesn’t even waver when her chance at true love is whisked away by the party. I admire her for sticking to her convictions through thick and thin, but can’t help but think that she’s choosing a life that doesn’t necessarily lead to her being very happy. END_OF_DOCUMENT_TOKEN_TO_BE_REPLACED

Ivo, aged just forty, is dying of kidney failure in a care home when nurse Sheila tasks him with making his way through the alphabet, thinking of a story for each part of the body. Each letter inspires a kaleidoscope of different memories, as each body part takes him back to a different moment, feeling or person. As he works his way through the body, starting at Adam’s Apple, we gradually build up a picture of how his life has played out and how he’s ended up in the hospice.

For the most part, Ivo’s memories are dominated by two people – his ex-girlfriend Mia and his best friend Mal. Friends since they were at school, Mal has always been the reckless, outspoken leader of the group. As they get older, Mal and the rest of Ivo’s friends draw him into destructive cycle of drugs and alcohol. When he meets Mia, he gets a taste of what life could be like if he followed a different path. As his memories unfold, we’re thrown right into the middle of the key defining moments of his life to witness as Ivo makes choices that could affect the course of his future forever.

I didn’t find Ivo to be the most sympathetic of characters – and this may be down to the matter of fact and brutally honest writing style of author James Hannah, which exposes his characters’ every flaw. His life is filled with regrets and things that he should have done differently. He deliberately neglects his health, wilfully ignoring the seriousness of his diabetes diagnosis. Mal is undoubtedly a bad influence, but Ivo shows very little restraint, is easily led and refuses to take responsibility for his actions. Even though he loves his Mia, his choices keep pulling him away from her at every turn. In the end, his devil-may-care attitude has devastating and irreversible consequences. END_OF_DOCUMENT_TOKEN_TO_BE_REPLACED