One day, the world wakes up to find that the rotation of the earth has begun to slow. As the days continue to stretch and the minutes pile in, the very notion of time is distorted thrown out of proportion and has to be redefined. This has a catastrophic effect on nature, throwing life as we know it out of kilter. 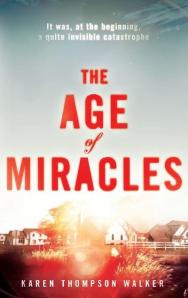 Throughout the novel, we have only one narrator. Julia is eleven years old when the slowing begins. Her perspective shapes the entire book, from her views on her parents’ marriage to her experiences of loss, death and change. This has a really interesting narrative effect and I thought it worked incredibly well.

We don’t know anything about the rest of the planet other than what we hear from Julia. Throughout the whole novel, Julia is more involved in the immediate problems of school, friends, bras and first crushes than with the impending disaster that continues to turn everything she knows about the world upside down. The news about the progress of the world is reported rather than dwelled upon, and as society fights to retain a sense of normality, Julia’s attention is absorbed by the small details of daily life.

That’s the main difference between ‘The Age of Miracles’ and other dystopian, end-of-the-world fiction. It’s such a stark contrast that I’d probably classify this as more of a coming of age novel. Rather, than focusing on the cause and solutions of the global crisis, this book is much more concerned with human relationships.

It raises some interesting questions. Does the slowing really affect Julia’s childhood, or are her experiences common adolescents all over the world, in every culture, no matter what the situation? It also drives home some truths. Relationships will always be put under strain. People will always disagree. Society will always marginalise certain groups that go against the norm. Humans will always adapt and find a way to survive.

Others have commented that they thought the pace was a bit too slow or that there wasn’t enough of a focus on the science fiction aspect, but I really enjoyed this book. I found the ending in particular really interesting. I don’t want to ruin it for anyone who hasn’t read it, but it draws together all of the themes set out in the book and it continued to play on my mind for hours after I turned the last page. All in all I’d definitely recommend it, just make sure you’re not expecting it to be something it’s not.

5 thoughts on “‘The Age of Miracles’ by Karen Thompson Walker”

A love of books are our very core!